The top-performing coins for the second week of January were Aptos (APT), Solana (SOL), Decentraland (MANA), Optimism (OP), and The Sandbox (SAND). The best-performing coins recorded their gains during a week when various media outlets claimed that FTX has recovered more than $5 billion in assets.

Aside from this, the crypto winter that gripped the market throughout 2022 seeped into the decentralized finance sector again during the week. Crypto.com laid off around 20% of its workforce due to an unprofitable market while Coinbase announced that a further 950 people will lose their jobs. Below, JPEX takes an extensive review of the best performing cryptocurrencies within the seven (7) – day period.

APT, the native asset of Aptos, a layer one (1) Proof-of-Stake (PoS) blockchain that aims to bring mainstream adoption to Web3 by empowering an ecosystem of decentralized applications (dApps) to solve real-world user problems.

Aptos’ existence is largely reliant on FTX as the now-bankrupt exchange played an instrumental part in raising funds for Aptos Labs, the company behind the project.

News of the $5 billion recovery in addition to positive market sentiment helped the coin gain significantly in price.

APT opened on Sunday, 8th January 2023 with a price of $3.83. APT reached a weekly high of $8.18 on Saturday, 14th January, tested a weekly low of $3.74 and closed the week with a new price of $7.70. Overall, there were minimum and maximum daily trading volumes of $70 million and $1 billion respectively. This led to a significant spike in APT market capitalization from $510 million and $1 billion.

Solana (SOL) Increased by more than 80%

SOL, the native asset of one of the most vibrant ecosystems in the form of Solana which features NFTs and NFT marketplaces increased substantially within the week.

This came on the back of a market rebound that saw other cryptocurrencies such as Bitcoin (BTC) and Ethereum (ETH) soar in value. Following on from last week when SOL traded upwards because of a meme coin called BONK which was built on the Solana blockchain, the development team behind the first meme-inspired currency launched a BonkDAO Council.

Excerpts of the tweet pointed out, “We are happy to announce that we have gathered a group of respected Solana community members across decentralized finance (DeFi), 1/1 Art, and NFT projects to form the initial BonkDAO Council.”

SOL responded positively after its daily trading volume increased from a minimum of $535 million to a maximum of $3.4 billion.

SOL ascended by 85% within seven days.

Metaverse tokens shed a huge part of their values throughout 2022. Thanks to renewed interest in metaverse platforms which are used to create, sell, and buy virtual lands, there has been a rise in the price of metaverse tokens such as MANA.

Daily trading volume soared from the least of $75 million to the highest of $849 million. In the process, MANA’s market capitalization of $700 million on 8th January increased to $1.1 billion. 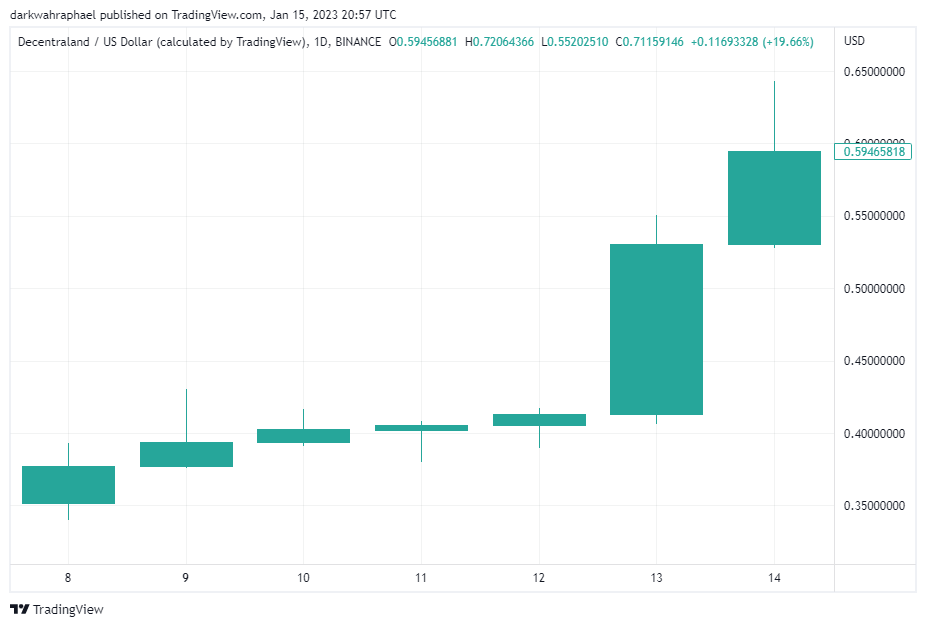 SAND and OP followed the bullish engulfing of the market and traded in the northern direction during the week. SAND ascended by 57% while OP increased by 46%.

In the process, OP saw a rise in market capitalization from $296 million to $405 million.

SAND saw a spike in trading volume from $128 million to $624 million. As one of the most demanded metaverse tokens thanks to its extensive use by mainstream organizations, SAND increased to a closing price of $0.6647 after opening at $0.4545. SAND market capitalization rose from $745 million on Sunday, 8th January to $997 million on Saturday, 14th January.